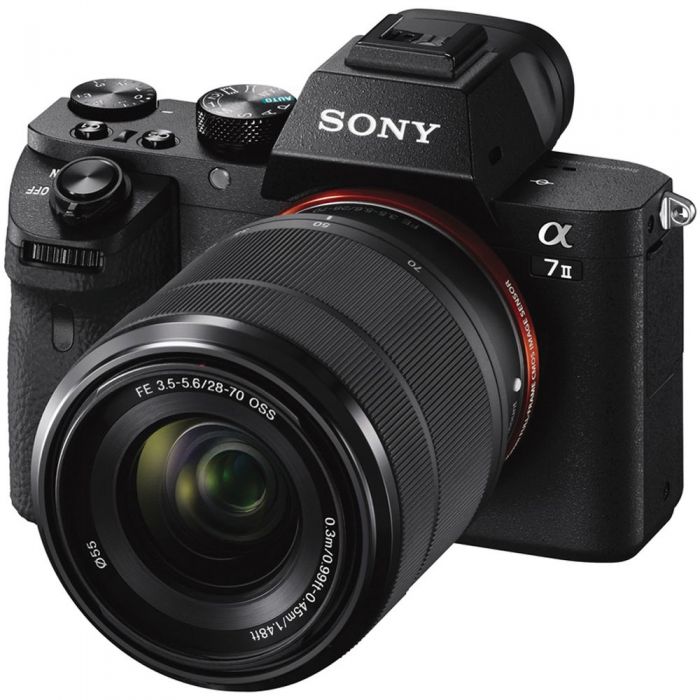 Sony has taken their line of full-frame cameras to the next level with the Alpha a7 II Mirrorless Digital Camera with FE 28-70mm f/3.5-5.6 OSS Lens, which features 5-axis SteadyShot INSIDE image stabilization with 4.5 stops of compensation for pitch, yaw, horizontal shift, vertical shift, and roll. Operation of the 24.3-megapixel series has been streamlined with a redesigned grip, shutter release button, and customizable controls. The a7 II also features a moisture- and dust-resistant design with a magnesium alloy body and a more robust lens mount. And, with refined algorithms and better utilization of the BIONZ X image processor, the a7 II has an enhanced Fast Hybrid AF system that is about 30% faster than the previous model along with a 5 fps burst rate with continuous autofocus as well as a 40% faster start time.

In addition to highly detailed stills with smooth gradations, the a7 II now has access to the high-bit-rate XAVC S format with 60p, 30p, and 24p recording options, all at 50 Mbps. The look of movies can also be adjusted with picture profiles, including the addition of the S-Log2 gamma setting with a dynamic range approximately 1,300% of the standard sRGB spectrum. Timecode and user bit settings are available as well as clean HDMI output for a variety of recording options.

The advanced Sony Multi-Interface shoe expands compatibility options for flash, microphone, and other accessories and, as an E-mount full-frame camera, the a7 II is compatible with all present APS-C E-mount lenses in APS-C crop mode as well as new E-mount full-frame Zeiss and Sony G-series lenses. Lens mount adapters with a tripod mount are also available to use A-mount lenses on E-mount cameras, and an optional dedicated battery grip enables stable extended shooting and vertical orientation stability.

Rounding out the a7 II's imaging capabilities, both a 3.0" 1,228.8k-dot tilting LCD monitor and 2.36 million-dot OLED electronic viewfinder are available for image monitoring and review. Built-in Wi-Fi connectivity, with support for NFC, is available, too, for instant sharing of imagery from the camera as well as remote camera control from a linked mobile device.

Bundled with the a7 II in this kit is the FE 28-70mm f/3.5-5.6 OSS E-mount lens. This wide-to-portrait zoom incorporates three aspherical elements and one extra-low dispersion element into its design to minimize chromatic aberrations and enhance overall image clarity. An optical SteadyShot image stabilization system has also been added to minimize the appearance of camera shake to suit working in dim lighting and with low shutter speeds. This stabilization will work with the in-body stabilization found in the camera. It has a minimum focus distance of 11.8".

Incorporated into the a7II's redesigned body are a 24.3-megapixel Exmor CMOS image sensor and BIONZ X image processor, which work together to enable a wide dynamic range with minimal noise and rich, subtle gradations. The camera features an ISO range of 100-51,200 which can be expanded down to ISO 50. Also, this combination allows the a7II to reproduce details with excellent clarity.

Benefitting image quality is the use of detail reproduction technology and diffraction-reducing technology which suppresses the effects of diffraction to reproduce fine details at small aperture settings. Add to this area-specific noise reduction to selectively apply different noise reduction to each area for clear imagery. Also, the sensor features 16-bit image processing with a 14-bit RAW output to preserve detail and ensure optimal quality for later adjustment.

Further improved in this generation is metering performance, which is now possible down to a rated -1 EV. Also, the a7II will start up approximately 40% faster than the previous generation for almost instant on.

Packed into the svelte a7II is a remarkable 5-axis SteadyShot INSIDE image stabilization system. This compensates for five types of camera shake encountered during handheld shooting of still images and video. This allows users to confidently use any lens, even adapted lenses, for critical imaging without encountering blur from camera shake. This system will compensate for approximately 4.5 stops of shutter speed for working with a huge variety of subjects.

For long focal lengths, the system will correct for pitch and yaw adjustments. Macro and high magnification imagery on the other hand will benefit from the inclusion of horizontal and vertical shift compensation. And, all shooting styles will get usage out of the roll compensation. All 5 axes of stabilization will function at all times, even when used with third-party lenses and adapters or lenses with built-in optical stabilization.

When using lenses that do not transmit imaging data to the camera, manual settings can be used to input the correct focal length and ensure proper stabilization. Also, the viewfinder can be used to preview the amount of compensation by pressing the shutter release button halfway or magnifying the image.

Utilizing 117 phase-detection and 25 contrast-detection autofocus points with a wide area of coverage, the a7II can smoothly and quickly track fast-moving subjects throughout the frame. It optimizes for both speed and accuracy with an enhanced algorithm that improves performance by about 30% when compared to previous generations. This just developed algorithm will also more accurately predict subject movement for tracking that is 1.5x more accurate. Additionally, it can capture images at a rate of 5 fps while using continuous autofocus and automatic exposure. This can be captured in a burst of up to 77 frames when shooting in JPEG Fine L format and a continuous AF Display allows users to view the active AF points.

Another feature available with this AF system is a Lock-on AF tracking that will analyze more information from the scene to provide dramatically improved accuracy and stability. Eye AF is also available which will prioritize a subject's pupil for excellent portraits even with a shallow depth of field.

When recording internally, users will record video with a 4:2:0 sampling at 8-bit, however, to even further improve image quality the a7II has clean HDMI output for use with an external recorder. This allows users to capture 4:2:2 uncompressed video and save in an edit-ready format.

To make sure the a7II is able to use its extensive dynamic range while recording video it incorporates extensive customizable color and gamma controls. Users can adjust the gamma, black level, knee, color level, and more. Also users can use the same S-Log2 Gamma Curve that is found on high end Sony Cinema cameras that squeezes up to 1300% more dynamic range into the video signal then traditional REC709, for increased post-production flexibility.

With a higher 1,228.8k-dot resolution, the LCD screen will provide shooters with an excellent screen for composing images, adjusting settings, and reviewing video and photos. It also tilts upward 107° and downward 41° for working with multiple shooting angles. Use in sunlight is improved with the implementation of WhiteMagic technology which doubles the brightness of the display through a RGBW pixel structure.

With its 3-lens optical system the viewfinder faithfully displays what will appear in your recording, including the effects of your camera settings. You'll enjoy rich tonal gradations and improved contrast. High-end features like 100% frame coverage and a wide viewing angle enable comfortable and stable eye-level composition.

With a larger, more refined shape to the grip, users will find the a7II to have a more secure feel and grasp even when large lenses are mounted. Also, the shutter release button has been reshaped and moved forward for a more natural shooting position and a decrease in camera shake. The controls also have been refined with new position for easier handling and improved operation. Button customization is available with the ability to assign any of 56 functions to any of the 10 customizable buttons for a more personalized setup.

The compact form is well-built with a magnesium allow top cover, front cover, and internal structure. The lens mount has been redesigned with a greater strength and rigidity for extra security when using larger or longer lenses. The body itself also features greater sealing for dust and moisture resistance, providing more protection when shooting out in the elements. Additionally, the optical filter on the sensor has an anti-static coating and there is an anti-dust mechanism to prevent dust from adhering to the sensor.

The a7II features a 3.5mm microphone input jack for compatibility with external microphones. And for users needing more the a7II is also compatible with the Sony XLR-K2M XLR Adapter for recording professional balanced XLR audio signals with phantom power and adjustable mic/line inputs. For monitoring audio the a7II features a 3.5mm headphone jack as well as real time audio levels for a visual reference.

Built-in Wi-Fi connectivity enables the a7II to instantly share imagery to mobile devices for direct sharing online to social networking, via email, and to cloud storage sites. NFC (Near Field Communication) is also supported, which allows for one-touch connection between the camera and compatible mobile devices; no complex set-up is required. Once connected, the linked mobile device can also display a live view image on its screen and remotely control the camera's shutter.

Additionally, PlayMemories Camera Apps are also supported via the built-in Wi-Fi connection, and allow you to personalize the camera's features depending on specific shooting styles. Apps are available to suit creating portraits, detailed close-ups, sports, time lapse, motion shot, and other specific types of imagery.