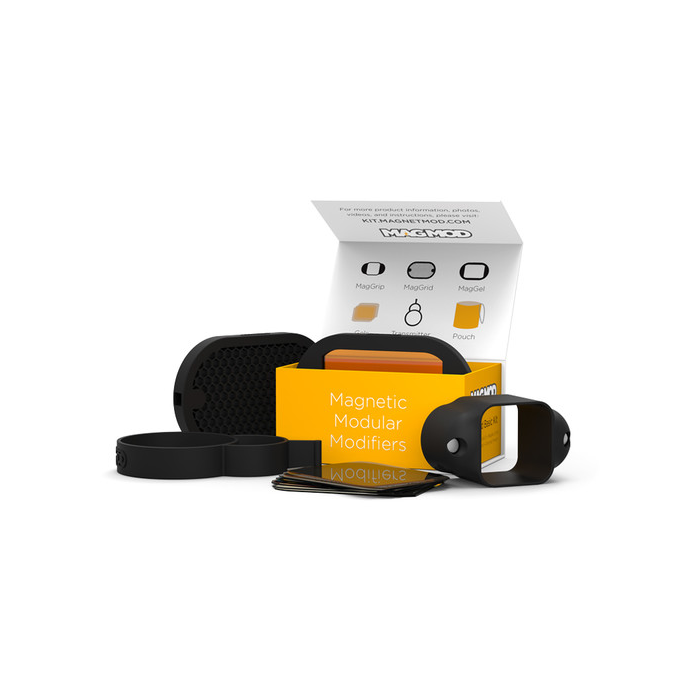 Insert some creativity into your on-camera flash with the MagMod2 Basic Kit including a few core accessories for the MagMod flash modifier system. It features the MagGrip which stretches over your flash head and enables the use of other MagMod modifiers, such as the included MagGrid2 and MagGel2 Slot, which comes with eight different gels. Also bundled are a transmitter band for mounting a radio transmitter cleanly to your flash head and a carrying pouch for convenience.

Made from an elastic silicone rubber, the MagGrip from MagMod stretches over the head of most on-camera flash units and provides two neodymium rare-earth magnets for quickly mounting a variety of accessories from the MagMod flash modifier system. The rubber offers a secure, tight grip on the flash head and is durable. Also, the flash head should be about 2.5" wide for the modifiers to be able to properly attach to the flash head.

Control light spill and narrow your flash's beam angle to 40° with the MagGrid2, designed for the MagMod flash modifier system. This grid efficiently focuses the light and attaches to the MagGrip via two neodymium rare-earth magnets. Also, it is stackable with other accessories and even other MagGrids, allowing users to further narrow their beam angle. It is made from molded silicone rubber for a sleek, simple design with good durability.

Insert some color or correct your lighting with the Standard Gel Set, designed for use with the MagMod flash modifier system. The kit includes full, 1/2, and 1/4 CTO, 1/2 blue, 1/2 straw, 1/2 plusgreen, an 8X (3 stop) ND, and opal frost diffusion gels made from a rigid polycarbonate for durability and easier handling. They easily slide into the MagMod gel slot for quick attachment and removal.