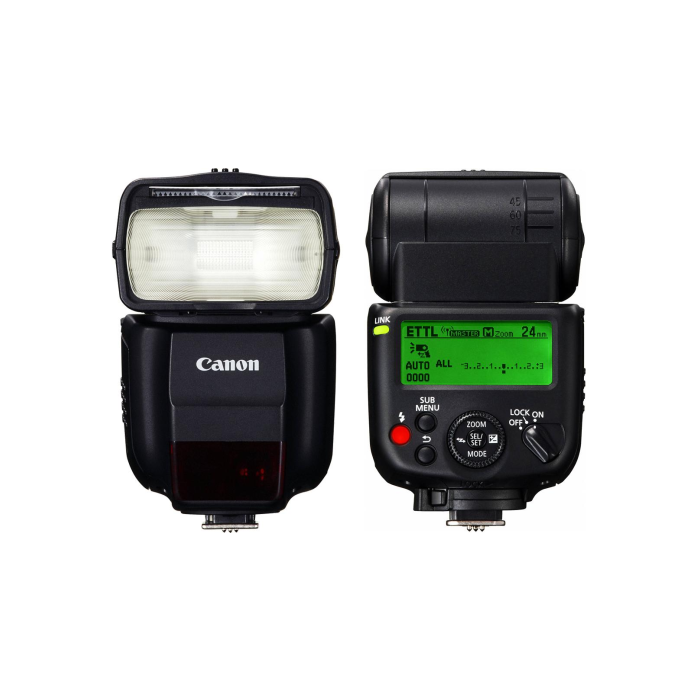 A refined, lightweight flashgun with power and capabilities that belie its compact frame, Canon’s Speedlite 430EX III-RT improves on prior models with an enlarged display screen, simplified controls and the introduction of radio-based wireless TTL - previously the remit of the much higher priced 600EX-RT. The 430EX III-RT also boasts optical triggering, a guide number of 43 with 24-105mm coverage, movable head with integral reflecting panel and a 3.2s cycle time. All in all, on or off camera the 430EX III-RT is a wonderfully capable tool: Brilliant for portraiture, enormously cost-effective and packed full of photo-making possibilities.

The power of light in the palm of your hand
The new Speedlite 430EX III-RT is Canon’s most capable mid-range Speedlite flash to date. A maximum Guide Number of 43 at ISO 100 provides enough power to light subjects in a wide range of conditions, with the flexibility to work alongside additional flashes using the radio or optical remote control system. Plus, with a lens coverage range of 24mm to 105mm, or to 14mm via the built-in adapter, the Speedlite 430EX III-RT offers a wide or narrow spread of light which is controllable by the user.

Powerful, yet compact enough to take anywhere
A guide number of 43 (m, ISO100) means there’s enough power for most occasions.
The Speedlite 430EX III-RT weights just 295g and is only 113.8mm long, so there’ll always be room for it in your bag.
Powered by readily-available AA batteries, the flash recycles following a full-power flash in just 3.2s.

Simple controls and an intuitive interface
The controls on the Speedlite 430EX III-RT echo those of many EOS cameras. Shortcut controls give access to key features, and a control wheel allows quick adjustments to be made. A lock switch prevents settings from being changed accidentally. An LCD screen shows settings and shooting information at a glance, and is illuminated for low-light conditions.

Use remote flash to create the look you want
Speedlite 430EX III-RT flashes can also be placed away from the camera, to simulate light coming from different directions.
Using Radio frequency triggering, Speedlite 430EX III-RT units can be controlled from up to 30m away, and do not require direct line of sight with the camera. This means they can be situated in more places, letting you create even more moods and effects.
The Speedlite 430EX III-RT can also be remotely controlled with optical triggering, so it will fit in immediately with your existing flash set up. It can be fired from 10m away using the optional Speedlite Transmitter ST-E2 or the Integrated Speedlite Transmitter built in the some EOS cameras.
Use multiple flashes together in groups, controlling the power of each group separately. Up to five groups can be created, with a maximum of 15 flashes in each group.

Shoot flattering portraits using bounced light
A movable flash head allows light to be bounced from large surfaces, like walls or ceilings, creating soft, shadow-free lighting that’s perfect for portraiture.
A built-in reflector panel can be deployed to create sparkling ‘catch lights’ in a subject’s eyes, bringing their expression to life.
Fit the included Bounce Adapter to soften the light even more. A coloured filter is also supplied, which aims warm up the colour temperature of the flash’s output so that it more closely matches the colour of indoor ambient lighting.
The Speedlite 430EX III-RT can zoom its flash output to match the angle of view of the lens being used.

Dual wireless flash triggering
The Speedlite 430EX III-RT can be fired while off-camera using radio-frequency or optical triggering, giving photographers huge versatility. When using radio-frequency triggering, flashes can be placed up to 30m away from the camera and do not have to be within direct line of site. This means they can be placed in many more locations, such as outside a room firing in through a window.
Optical triggering allows EOS cameras featuring a built-in Integrated Speedlite Transmitter (e.g. EOS 760D, EOS 70D and EOS 7D Mark II) to fire the Speedlite 430EX III-RT from up to 10m away, without the need for extra equipment.

What’s in the box?